Review of Paris Charms & Secrets Tour | Kids Out and About Boston

Just wandering Paris, you can't help but notice that the place is pretty charming. But if you'd like a guide to introduce you to areas of Paris that are a bit off the tourist-beaten path, the Paris Charms & Secrets Tour is a fun choice.

We met our tour guide, Sebastian, and the rest of our group at Place Vendôme. After quick introductions, we took a short walk to a nearby parking garage to get our bikes. 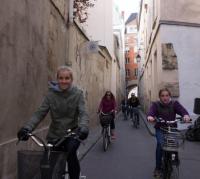 The Paris Charms & Secrets Tour uses electric bicycles, which no one in our family had tried before. These bikes have two speeds of electric power, which you can choose in much the same way that you switch gears, and it's possible to just ride it without the power, but you might have trouble keeping up with the group. With the electricity on, you don't have to do anything special: Just start pedaling, and you'll feel a little push, almost like when you first learned to ride and a grown-up held onto the seat and ran alongside pushing. The electric bikes were easy to use once we realized that stopping requires some firm braking (rather than coasting to the stop as bikers might be used to) and that if it feels like it's getting tougher to bike, it might be because you're not in one of the electric gears. I'd say we only truly appreciated the electric power on one uphill stretch, but I can imagine that if someone is very out of shape, they might find the extra power helpful.

The tour is four hours long and covers quite a bit of territory and several different locations. Part of the point of this tour is that you don't know exactly where you're going to go, and I don't want to spoil it for you. I will say that we'd planned this tour for near the end of our trip after we'd done quite a bit of sight-seeing, and the places we visited were either entirely new to us or were familiar places that we visited from a new angle. We biked quite a bit, but we also locked our bikes and left them while we followed our guide inside or into spaces that weren't bike-friendly. Our tour guide, Sebastian, was friendly and entertaining. 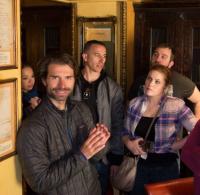 While I'm not going to list all of the places we visited on the tour (since part of its charm is the "secret" part), I will tell you one of our stops, simply because it was my favorite, and if you are a history geek like I am, it should go on your "must visit" list for a trip to Paris. We stopped during our tour for drinks at Le Procope, the oldest café in Paris (it opened in 1686). I had heard of the café, but I didn't know that it is a treasure trove of historic artifacts. Our group ordered drinks, then we trooped upstairs while our drinks were being prepared so that Sebastian could point out some of the coolest treasures. They include Marie Antoinette's final note to her family before heading off to the guillotine, a note that Robespierre had been writing when he was shot (the bottom is signed "Ro-" with drops of blood!), Voltaire's desk, and one of Napoleon's hats. The girls, who are huge Hamilton fans, were thrilled to discover that Jefferson used to hang out there.The entire restaurant is a wonder to walk around in, and they served my favorite chocolat viennois of our trip (that's cocoa with whipped cream on top). It hadn't occured to me to go to the restaurant, and even if it had, I would have felt intimidated trying to walk around looking at the artifacts on my own. That single stop made the whole tour for me.

Who Will Love This Tour? 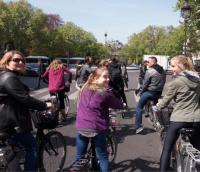 This tour is an excellent option for teenagers and adults. In our group, the youngest participants were 12 years old, and both of them found the sights and stories entertaining. Sebastian offered my (short) 12-year-old a different model electric bike that was size-appropriate, and that was helpful. But the biking was occasionally stressful for us because of the combination of busy roads, a large group (their usual limit is 12, but when an unexpected extra couple showed up they joined to make us to 14), and using the new-to-us and somewhat heavy electric bikes. This tour is a great choice if you or some of your group are looking for experiences that will feel less "tourist-y" than, say, a boat tour on the Seine.

Tips to Make the Most of Your Tour

Between the electric bikes, the quirky destinations, and Sebastian's enthusiastic storytelling, our tour made four hours fly by, and we were excited to discover so many new places we might not have thought to visit on our own.

© 2017, KidsOutAndAbout.com.
Katie Beltramo, a mother of two, is an editor at Kids Out and About. She also blogs at Capital District Fun.